While this may be a bit shameless, as Brewlab was our last post, I think this is worth posting. Brewlab is asking users to complete a survey about late opening hours. As die-hard coffee and computer fans, we feel that this would be the best thing since ever. Best part? You get a free drink for filling it out.

If only I lived in Edinburgh and didn't have just the one day there over New Years. This cafe is now 70% of the reason I want to move back to Edinburgh.

There's a great deal of internet buzz about new kid on the block Brew Lab, thanks to the owners having waged an extremely successful online media campaign over the last few years. As a result, from the first day they were full of excited customers. And rightly so. 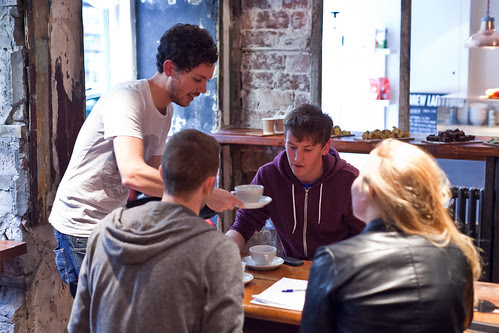 It's large; there are three seating areas with a range of seating from sofas and armchairs to large tables, with one- and two-seater options inbetween. They've managed to take the half-finished look that Black Medicine have used for years and make it seem strangely right, perhaps helped by the furniture being considerably more comfortable. 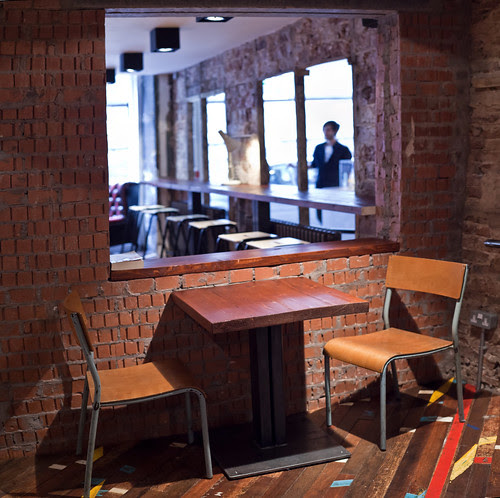 It's nicely lit, the music is quite bearable - I didn't feel the need to hide behind my own at least - and there are just about as many sockets as their are seats. Oh, and of course there's free Wifi, the password for which changes so that the students upstairs can't steal it all the time. 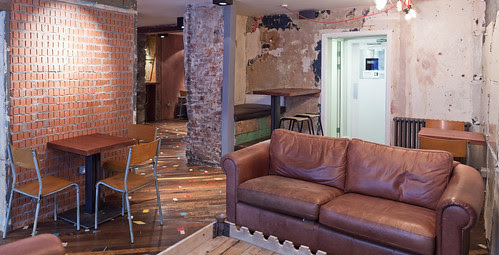 As a space it's near-perfect. Although they're only open 'normal' hours for now they plan to extend later into the evening over time. A marriage proposal may be in order! The only oddity is the place's key feature, the coffee... 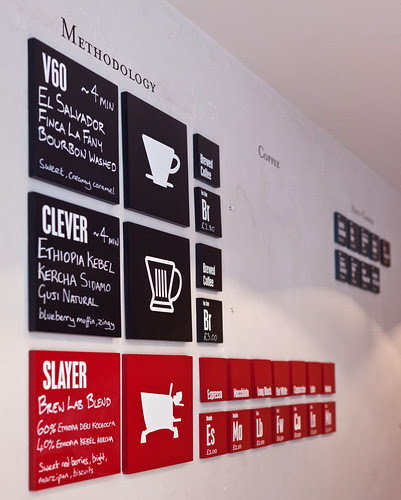 I mean, it's not coffee as you or I know it. We're accustomed to Starbucks-style brews which are basically flavoured milk, or Artisan-esque obsession over making the perfect cup of artfully poured but petite espresso-based coffee. Compared to them, this is Art. Science. Whatever, it's exciting... 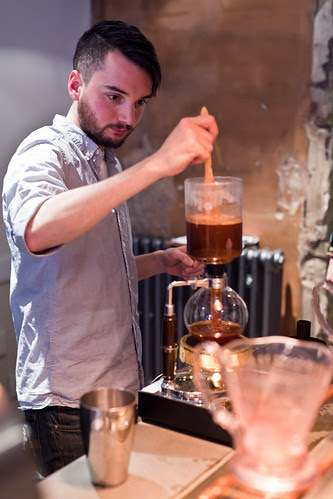 Yes, there is a (terrifyingly fancy) espresso machine; but the focus is on the other methods, hand brewing drinks one by one that bear as much relation to your Costa soy chai latte as that does to a cup of Nescafe. Coffee that has hints of blueberry because it's so full of flavour and subtlety rather than because there's been a syrup added. They're art, and they're special. 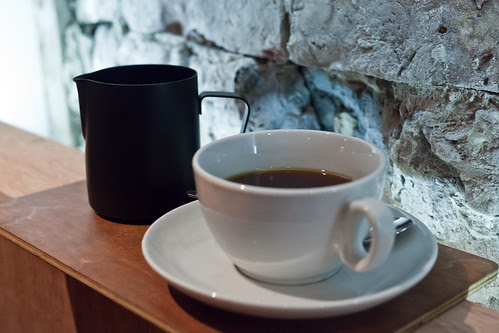 I'm not sure how suited they are to sitting around gulping for hours while getting work done, but this is my only concern; that's how good the place is. And since they can also do you a latte as well as a range of fine teas, it's not really a problem. And the fancy coffees really are worth trying...

So if you're in the vicinity you should give them a spin. I've yet to try their ever changing selection of scrumptious foods but I gather it's an excellent source of lunch. And you'll probably find me huddled in a corner, overcaffeinated but happy.

I have only one issue with Edinburgh Community Cafes - they don't talk about making sure that all cafes have wireless internet. Besides that, however, it's a pretty cool group of cafes that work together to work on projects and support each other, ensure fair trade and quality and to advertise volunteer positions and the like. There's around 30 odd cafes. The best thing - they have a loyalty card that helps with getting free soup!

Posted by chrisdonia at 07:53 No comments:

Today it seemed like time to investigate the much-hyped new bookshop/cafe in the Quartermile, Looking Glass Books. It's not obvious as it's in one of the newer buildings that aren't visible from Middle Meadow Walk.

It's not a building site anymore, in case you were wondering.

If you like Fredericks and you like pretty books you'll love this place. Clean and pretty, with interesting (deliberately and, I suspect, very expensively mismatched) furniture it's quite possible to pass a few hours here in idle or business-related chat.

What it may not be as good for is getting Work done.

Being in the Quartermile development seems to make it difficult to install power points for customer use and sure enough, Looking Glass seem to have none. I will make allowances because the shop has only been there about a week but when I asked for the Wifi password nobody knew it. Update below Thankfully I was meeting people there and not expecting to do any work or I'd have been scuppered.

The place has a lovely atmosphere, everyone I saw coming and going seemed to enjoy just being there. The teas are from eteaket and while they don't have the full range at least it means that the selection they have are reliable and more than just teabags. I didn't spot where the coffee was from but it was thoroughly drinkable, if perhaps served in overly small portions (I like a long drink, serving me coffee in cups or glasses that I could drink in one big gulp will not endear you to me).

I worry that it might not get much passing trade due to being so hidden away. It's the sort of place that you want to succeed, not least because it's an independent bookshop and we need more of them. I shall be watching it eagerly.

UPDATE It has been pointed out that there are in fact sockets - I must have had none nearby when I was in - and there was no Wifi password available because it needs none. Excellent news!

Posted by chrisdonia at 07:51 No comments:

A new addition to the every-growing cafe scene in Marchmont, Freeman's is nothing special to look at but is certainly spacious.

Proudly announcing the sources of their products, "The only supplier of Monmouth Coffee in Edinburgh", "Pastries & Bread from Bakery Andante, Morningside", "The Chocolate Tree hot chocolate", the effort seems to pay off as these things are better than in many nearby venues.

Decent Wifi but rather lacking in available sockets. The seating is variable, from tiny chairs to huge sofas; the tables seem to be filled mostly with people playing card games rather than waving their Macbooks around - which is a nice change. The clientele are, however, exactly what you would expect from a Marchmont cafe and as such tend to hang out for hours talking loudly amongst themselves. Not ideal for getting work done unless you are armed with good headphones.

Not a bad place, open late (looked like it was until at least 8pm, possibly 9) but a bit out of the way unless you live locally.

Posted by chrisdonia at 07:49 No comments:

We now have a map! Take a look here. It is obviously not full, but hopefully we'll fill it up soon and get suggestions as to what we can add to it, and what we should review next.

Your friendly customer reviews staff,
us.

I got lost yesterday trying to find my way to a friend's house is Leith. I don't yet live in the world of cyborg technology; following the extended mind theories of Edinburgh's own Andy Clark, what I mean by this is that I don't have a smartphone. Some of the time I have my laptop - yesterday, alas, I didn't.

After wandering around looking through closed windows on a bank holiday, I stumbled upon Coffee H@ME Internet, a snug little internet cafe on Leith Walk. They have computer's lining the wall, which makes it seem like your standard pay-and-get-out café - but the staff was incredibly helpful, the price for internet is cheap, and it's clear that they actually serve good coffee, and have a lot of options. They even have tables without computers, so you can bring your own. I might very well go there again if I can't find the Castle.

PS. In case you're wondering, I've moved away from Edinburgh, and Simon is moving too. Chris is still around, and we'll blog when we're back in this home city of ours, however. Also, we're always looking for other staff. Pay? None. Hours? Non-existant. Satisfaction? Well, I guess that depends.